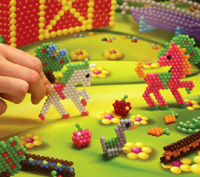 A toxic chemical that converts into a fatal drug was found in a popular Chinese-made toy. The Australian company is investigating how the toxin ended up in this product.

An 18-month-old boy became the fourth child hospitalized in Australia in recent weeks when he collapsed after eating the toy.

Retailers have pulled millions of the toys, known as Bindeez in Australia and Aqua Dots in the United States, from their shelves this week after scientists found the products contain a chemical that converts into the so-called "date rape" drug gamma hydroxy butyrate when ingested.

A British distributor announced Friday a precautionary recall of the toys throughout the United Kingdom although there had been no reports of poisoning in that country.

The toy, which is produced in China by Australia-based Moose Enterprises, contains colorful beads that can be arranged into designs and fused when sprayed with water.

According to a product description, the toys were supposed to be coated with 1,5-pentanediol, a nontoxic compound found in glue, but instead contained 1,4-butanediol, a potentially harmful chemical widely used in cleaners and plastics.

The New South Wales state health department lists 1,4-butanediol as a possible replacement for gamma hydroxy butyrate, which is known to cause unconsciousness, seizures, drowsiness, coma and death.

Peter Mahon, a spokesman for Moose Enterprises, said the company was still investigating how the chemical came to be included in the toys, which are made at a factory in Shenzhen in China's Guangdong province.

He told The Associated Press the "ingredients were switched at the point of manufacture without Moose's knowledge," but declined to give the name of the factory, saying it was "not appropriate" at this time.

"Really, the main thing we're doing is concentrating our efforts on making people aware that children shouldn't be playing with these products and getting them back," Mahon said in a telephone interview.

Moose Enterprises, which distributes the toys to 40 different countries, placed advertisements in several local and national newspapers Friday urging consumers to return any products, adding that "no person should ingest Bindeez Beads."

Lin Enright, the director of public relations for Australia's Competition and Consumer Commission said officials met with Moose Enterprises on Thursday to discuss what action the company was taking to prevent future contamination of its products, but declined to reveal the outcome of the meeting.

Meanwhile, 18-month-old Matthew Saunder was hospitalized after eating the toy. His father, Glen, told reporters he felt "helpless" watching his son become limp and unresponsive after he gobbled down an unknown quantity of the beads.

"He just appeared intoxicated at the time, then he just went rapidly downhill from there," said Saunder, whose son was in a stable condition after being admitted Thursday. "It was very, very frightening."

At least two children have also been hospitalized in the United States after eating the beads.

Both 1,4-butanediol and 1,5-pentanediol are manufactured in China and elsewhere, including by major multinational companies, and are also marketed over the Internet.

There is a significant difference in price between the two chemicals.

Meanwhile, toy sets seized in Hong Kong were being tested Thursday, a customs official said, speaking on condition of anonymity because of policy. If the tests come back positive for 1,4-butanediol, suppliers in Hong Kong could face a year in jail and fines of US$12,877 (EUR8,746.77), she said.