A small cruise ship with 66 people aboard was run aground early Thursday to keep it from sinking. 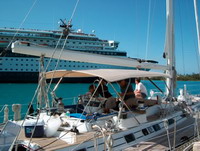 The people on board were rescued safely with no injuries reported.

The captain wanted to keep the 207-foot (63-meter) ship from sinking in the Intracoastal Waterway, the Coast Guard said. It was not clear why it was taking on water.

Passengers ate breakfast as they awaited rescue, he said.

The cruise ship was lodged in mud about 9 feet (2.7 meters) below the water's surface and was stable; the Coast Guard lowered pumps to help remove the water in the ship. The ship was only about 100 feet (30.5 meters) from shore, but the surrounding area is a wooded swamp, Evanson said.

The boat, The Spirit of Nantucket, was on a 10-day cruise from Alexandria, Virginia, to Charleston, South Carolina, Evanson said.

Larissa Grill, who manages hotel operations on the ship, said she was awakened by an alarm at about 5:30 a.m. and felt "just a little bump" when the ship stopped.

She said passengers were in good spirits while waiting to be taken off the ship.

"Everyone was having a great time, considering the circumstances," Grill said.

The boat is owned by Cruise West, a small cruise line based in Seattle. The damage was being assessed, the company said in a statement.

Cruise West made arrangements to take the passengers to a hotel. A company spokesman did not return a telephone call seeking additional comment.

The boat is 207 feet (63 meters) long, can accommodate 102 guests and has an 8-foot (2.4-meter) draft, making it suited for cruising shallow waterways, according to Cruise West's Web site.