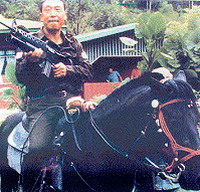 Pakistani man accused of smuggling heroin into the kingdom of Saudi Arabia was beheaded.

In a statement carried by the official Saudi Press Agency, the ministry said that Bahrour Sadbar Khan was executed in the capital, Riyadh.

Thursday's execution brought to 129 the number of people beheaded in the kingdom this year, according to an Associated Press count. Saudi Arabia beheaded 38 people last year and 83 people in 2005.