One killed, nearly 22,000 homes damaged after flooding in Cuba

One man was killed and nearly 22,000 homes destroyed during weeks of rainfalls and flooding intensified by Tropical Storm Noel, the losses totaled almost 500 million US dollars (Ђ342 million) in the island's eastern provinces, Cuba reported. 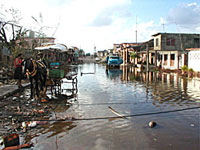 One killed, nearly 22,000 homes damaged after flooding in Cuba

A brief government announcement published on the front page of state-run newspapers provided what was described as a preliminary analysis of the damage caused by rains that pounded central and eastern areas of the country between Oct. 11 and Nov. 5.

It said Yusmani Tames, a resident of Granma province, died while trying to cross a flood-swollen river. The date of his death was not given and it was unclear if it was a direct result of flooding associated with Noel.

The tropical storm moved into Cuba on Oct. 31, causing dams to overflow and forcing more than 100,000 Cubans to evacuate homes in low-lying and mountainous areas. The storm sparked flooding and mudslides in other countries that killed 148 people across the Caribbean.

State radio reported Thursday that 29,000 people in Granma province alone were still living with neighbors, relatives or in government shelters. Figures on remaining evacuees elsewhere were not released, though residents in many areas said flood waters were beginning to recede.