Dynamite and cash machines were found in a police raid on a mountain village on the Greek island Crete, notorious for its gun culture and blood feuds. 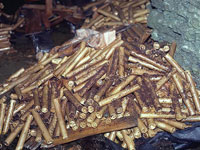 Several hundred police searched homes and outhouses in Zoniana for a second day Thursday. Greece's police chief headed the operation, which was ordered after about 20 local gunmen ambushed a police convoy Monday. They sprayed the convoy vehicles with automatic gunfire, injuring three officers.

Nine villagers have been arrested on criminal charges, including attempted murder, drug trafficking and possession of explosives.

Outside Zoniana, police discovered several cash machines that had been ripped from the walls of banks in recent robberies, as well as five stolen cars and six motorcycles that had all been burned. They also found a cannabis processing site and seized 5 kilograms (11 pounds).

Crime in the mountain area has plagued the police for decades.

Earlier this year, a helicopter carrying guests to a baptism ceremony at a mountaintop chapel made a forced landing after unknown gunmen mistook it for a police chopper and opened fire.