Rotterdam port to close because of predicted storm surges

Europe's largest harbor in Rotterdam will be closed for the first time under storm conditions, as forecasts predicted storm surges and strong wind for later Thursday. 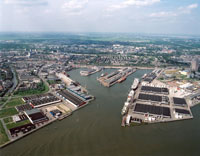 Rotterdam port to close because of predicted storm surges

Coastal authorities were put on the highest weather alert since 1976.

If forecasts of 4-meter-high (13-feet) surges and winds of 100 kph (60 mph) prove true, the new Maeslant Barrier protecting the mouth of Rotterdam Port will close for the first time under storm conditions, Traffic and Water Ministry spokeswoman Cleo Vissers said. That would halt all ship traffic.

The storm was not expected to breach any of the dikes and dunes that protect the Netherlands, where more than two-thirds of the 16 million population lives below sea level.

Jan Kroos, spokesman of the Storm Flood Warning Service, told NOS state television that people should not be too worried. "We presume our water defenses will do what they're supposed to do," he said.