Russia's highest court refused to recognize the executed last czar Nicholas II and his family as victims of political repression. 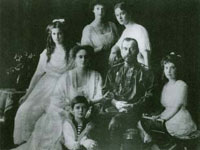 The Supreme Court upheld repeated rulings by lower courts and prosecutors that the 1918 slaying of the czar, his wife and their five children by a Bolshevik firing squad was premeditated murder, not a political reprisal, said German Lukyanov, a lawyer for the royal family's descendants.

"This is an illegal decision," Lukyanov told The Associated Press. "It states that the Bolsheviks did not violate the rights and freedoms of the czar and his family by locking them up and then executing them."

Nicholas II abdicated in 1917 as revolutionary fervor swept Russia, and he and his family were detained. The czar, his wife Alexandra and their son and four daughters were fatally shot on July 17, 1918, in a basement room of a merchant's house where they were held in the Ural Mountains city of Yekaterinburg.

Prosecutors have consistently refused a petition by descendants of the royal family to recognize the killings as political, and a Moscow court earlier this year declined to order them to do so. After its latest decision, in September, the Prosecutor General's Office said an investigation found that no court or "extrajudicial body" had issued any sort of execution or repression order ahead of the killings.

The remains of Nicholas, the empress Alexandra and three of their daughters were unearthed in Yekaterinburg in 1991, while the Soviet Union was collapsing. After genetic tests convinced forensics experts of their authenticity, they were buried in 1998 in a cathedral in the imperial capital of St. Petersburg. This summer, archeologists found what they say are likely the remains Crown Prince Alexei, the 13-year-old Romanov dynasty heir, and his sister Maria.

The Russian Orthodox Church canonized Nicholas and his family in 2000.

But descendants have been seeking their "rehabilitation" - recognition that they were victims of political repression by the country's Communist-era authorities. Many of the people who were shot or sent to prison camps under Soviet rule have been rehabilitated, exonerating them of the crimes they were accused of at the time.

Human rights activists said the ruling fit in with what they said was reluctance by President Vladimir Putin and his government to confront Russia's Soviet past.

Putin, who has stressed the need for patriotism and pride, has restored Soviet-era symbols, such as the music for the national anthem, and said Western portrayals of the Soviet era were too negative.

Declaring Nicholas a political victim "would be same as recognizing that the history of our state is based on violence and crime," said Arseny Roginsky, a historian and member of the human rights group Memorial.

He said the court's ruling was politically motivated and followed an "obvious trend toward the left in the country.

Roginsky said a document showing that the execution of the czar's family had been ordered by the Bolshevik authority in Yekaterinburg could be found in state archives. In a further indication of political motives, he said, the slayings were carried out to prevent Nicholas from becoming a symbol of resistance against Bolshevism.

"Of course the Romanovs were victims of repressions," the Interfax news agency quoted human rights activist Lyudmila Alexeyeva, director of the Moscow Helsinki Group, as saying. "They were shot by the people who held power. And now, as historians have found, the highest authorities knew about it."

Also Thursday, a top forensic agency official in Yekaterinburg said initial examinations of the remains found this summer showed that, in addition to their age and gender, bullet wounds in their broken skulls indicated they could belong to the czar's two missing children.

But Vladimir Gromov said the remains were too badly preserved and final conclusions could only be made after DNA and molecular tests.

He said a group of experts from a U.S. army genetic lab were expected to arrive in Yekaterinburg next week to help identify the remains. He said they may decide on a method of extracting DNA from the remains and may take samples to the United States.

"We want to make sure that the examination (of the remains) is as open and transparent as possible," Gromov said.