Switzerland's highest court ordered to release Vitaly Kaloyev, a Russian architect, imprisoned since 2004 for killing an air traffic controller Peter Nielsen. Kaloyev blamed Nielsen for the death of his wife and children in a plane collision. 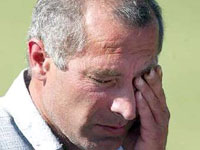 The Swiss Federal Tribunal rejected an appeal by Zurich prosecutors against the reduction of Vitaly Kaloyev's sentence to five-and-a-quarter years from eight years. Kaloyev was ordered released because he has served more than two-thirds of his sentence with good behavior.

Two of the court's five judges dissented from the majority opinion, calling the current sentence against the 51-year-old too mild.

Kaloyev was convicted in October 2005 of premeditated homicide in the killing of Danish-born Peter Nielsen, an air traffic controller with Swiss company Skyguide.

Nielsen was the only person on duty when a Bashkirian Airlines plane and a DHL cargo jet collided on July 1, 2002, in airspace he was responsible for over southern Germany. The crash killed 71 people, most of them schoolchildren on a holiday trip to Spain.

The sentence against Kaloyev, whose ordeal brought him widespread sympathy in his native Russia, was reduced by a regional court in July, which upheld his appeal that he acted with diminished responsibility because of the deaths of his wife and two children.

Zurich prosecutors appealed the decision, but their defeat Thursday means there are no more legal obstacles to Kaloyev's release, which had been scheduled to take place on Aug. 24.

Kaloyev has acknowledged that he must have killed Nielsen in February 2004, but said he could not remember the slaying.

Kaloyev's sister Zoya said that relatives would be gathering in Vladikavkaz, the capital of Russia's North Ossetia region, to welcome him back home.

"We ... all prayed yesterday for the end of Vitaly's suffering in prison," she said, according to ITAR-Tass news agency. "We always believed that sooner or later justice would prevail and Vitaly would be freed."

North Ossetia's top official, Taymuraz Mamsurov, welcomed the ruling, saying that everyone in the region "has been closely watching their countryman's fate," and looking forward to his return, ITAR-Tass reported.

In September, four Skyguide employees were found guilty of negligent homicide in a separate proceeding examining the events that led to the crash. Three midlevel managers were given one-year suspended prison sentences, while another employee - a project manager - received a suspended fine of 13,500 Swiss francs (US$11,200; €8,250).

Four other Skyguide officials were acquitted of wrongdoing in the accident.