Transport workers declared that they would join walkouts next week against President Nicolas Sarkozy's plans to cut special retirement benefits for some state workers. 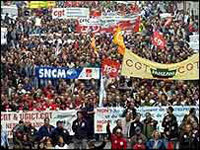 The strike call by the CGT union increases chances for a repeat of the serious transport disruption that hit France last month in a first wave of strikes against Sarkozy's proposed pension reforms.

CGT spokesman Jacques Eliez said the union would call for an open-ended strike from Wednesday at the RATP transport authority, which runs the Metro underground train system and buses in the French capital.

The CGT is the best-represented union among RATP employees. Another union, Sud-RATP, also has said that it will call an open-ended strike. The five other Paris transport unions were to decide later Thursday whether they would join the action.

Six rail unions had already called for an open-ended walkout from Tuesday evening on the national rail network.

Last month's rail, Metro and bus strikes effectively cut off Paris from many of its suburbs and caused disruptions for several days.

They were the biggest such strikes since 1995, when strikes paralyzed the country and ultimately tempered former President Jacques Chirac's appetite for reform.

Sarkozy said this week that he would not give way.

"There will be strikes, protests, but I will stand firm," he said.