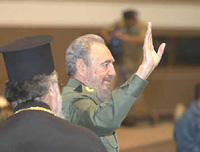 Lage arrived in Chile at the head Cuba's delegation to the Ibero-American Summit, which was to open later Thursday.

Castro has not been seen in public since July 2006, when he underwent emergency intestinal surgery and transferred power to his younger brother, Defense Minister Raul Castro. In recent government videos he has appeared lucid.

"He is working, working hard, every day more," Lage said of Castro. "I'd say he's reading, studying, analyzing, offering ideas, thoughts, giving us ideas for us to continue the battle for the ideals of justice and solidarity to which he has dedicated his entire life."

Asked whether Castro would soon appear in public and resume full presidential power, Lage replied, "he's already assuming tasks, perhaps the most important task a chief of state can have, which is seeding consciousness."