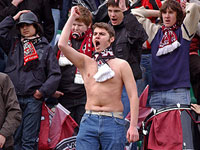 Three Red Star Belgrade fans were attacked by a group of 10 men at a cafeteria. Fans were hospitalized with many wounds.

Police said the three men were stabbed in the legs and their injuries were non life-threatening.

The Serbian fans were in Greece for a UEFA Cup match against Aris Thessaloniki later Thursday.

The victims were sitting at a sea-front cafeteria when 10 men in motorcycle helmets attacked them with knives before running away, police said. A fourth Red Star fan, a woman, was unhurt.

Earlier, another two Red Star fans were hospitalized after being beaten up by unknown assailants.