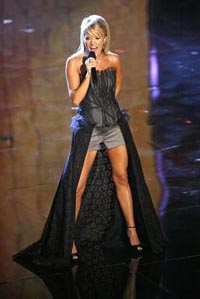 Kenny Chesney and Carrie Underwood became the best again at the Country Music Association Awards – and where is an intrigue?

Chesney won his second straight entertainer of the year award Wednesday, while Underwood made it back-to-back trophies as female vocalist of the year.

"God has blessed me with so many wonderful things," said Underwood, the former "American Idol" sensation who also won single of the year, for "Before He Cheats."

"If you told me a few years ago I had been nominated with the people I'm nominated with, I would have called you absolutely insane."

Chesney, who also took the music association's top honor in 2004, was humble in his acceptance.

"I can't believe that I get to stand on the stages that I stand on every summer and get to sing the songs that I sing," the star said. "I love country music and I love doing what I do."

Brad Paisley, who won in the male vocalist category, teared up as he thanked his father, who he said carried amplifiers and ran sound "even though he didn't know what he was doing."

"I can't tell you what this means to me to win this. I always wanted to win this award at least once - this will do," said Paisley, who also won music video for his hit "Online."

Earlier, Sugarland won vocal duo of the year, breaking Brooks & Dunn's long-standing lock on the award - they had won the duo category 14 of the last 15 years, including the last six in a row.

"If we're standing up here, we have this lofty view because we're standing on the shoulders of giants who've come before us," said Sugarland's Jennifer Nettles.

The award for newcomer of the year went to 17-year-old Taylor Swift. She gave a tearful speech in which she joked, "This is definitely the highlight of my senior year."

Other winners included Tracy Lawrence, featuring Tim McGraw and Chesney, for musical event for "Find Out Who Your Friends Are"; and Jerry Douglas of Union Station as musician of the year.

Vince Gill introduced the Eagles, who played their single "How Long" and received a standing ovation. "For 35 years or more, these next guys have been writing songs like we wished we could write," Gill said.

Rascal Flatts opened the show with the title track to its latest album, "Still Feels Good," while a montage of country stars flashed on large screens behind them, including a photo of Dolly Parton and Porter Wagoner. Wagoner died last week of lung cancer.

The show was broadcast live on ABC and was hosted by James Denton of "Desperate Housewives," Kate Walsh of "Private Practice" and Kimberly Williams-Paisley - Brad Paisley's wife - of "According to Jim."

"I'm like a kid in a candy store here. Lots of good country snacks. I'm all excited and giddy," Walsh cracked.