Russian last czar and his family not recognized as political victims 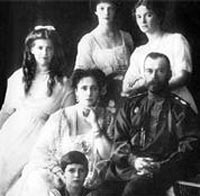 Russian last czar and his family not recognized as political victims

Russian latest tsar Nicholas II and his family were not recognized as victims of political repression, a lawyer for the royal family's descendants said.

The Supreme Court upheld repeated rulings by lower courts and prosecutors that the 1918 slaying of the czar, his wife and their five children was premeditated murder, not a political reprisal, lawyer German Lukyanov said.

"This is an illegal decision," Lukyanov said. "It states that the Bolsheviks did not violate the rights and freedoms of the czar and his family by locking them up and then executing them."

Nicholas II abdicated in 1917 as revolutionary fervor swept Russia, and he and his family were detained. The next year, the czar, his wife Alexandra and their four daughters and one son were sent to the city of Yekaterinburg, where a firing squad executed them on July 17, 1918, in a basement room of a nobleman's house where they were held.

Prosecutors have consistently refused a petition by descendants of the royal family to recognize the killings as political, and a Moscow court earlier this year declined to order them to do so. After its latest decision, in September, the Prosecutor General's office said an investigation found that no court or "extrajudicial body" had issued any sort of execution or repression order ahead of the killings.

The royal family's remains were unearthed in 1991 while the Soviet Union was collapsing. After genetic tests convinced forensics experts of their authenticity, they were buried in 1998 in a cathedral in the imperial capital of St. Petersburg.

The Russian Orthodox Church canonized Nicholas and his family in 2000.

But Lukyanov said the Supreme Court's ruling means that Russian authorities "do not want to condemn Bolshevism."

Classifying Nicholas and his family as victims of Bolshevik political repression would mean they would likely be officially "rehabilitated," as have many victims of Soviet-era political reprisals.