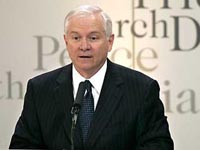 U.S. Defense Secretary Robert Gates was trying to urge Japan to strengthen efforts on global security, saying that it would be very desirable to extend an anti-terror naval mission in the Indian Ocean – just as he was expected.

Gates, who arrived from South Korea on Wednesday for a two-day visit, met with Foreign Minister Masahiko Komura in the first of a string of meetings - including talks with Prime Minister Yasuo Fukuda - that stretched into the evening.

The two discussed Japan's resuming a halted naval mission in the Indian Ocean and building a joint U.S.-Japan missile defense system, Komura said after the meeting. They also agreed China should be more transparent about its growing military budget.

The U.S. defense chief arrives in Tokyo amid a political battle over Japan's mission in the Indian Ocean in support of U.S.-led troops fighting in Afghanistan. The mission was halted Nov. 1 when the opposition blocked it in parliament.

"Defense Secretary Gates told me he hoped that the bill would be passed, and said that he also greatly appreciated Japan's refueling activities so far," Fukuda told reporters Thursday evening after his meeting with Gates.

The United States has argued stridently for the continuation of the mission, and American officials have met with members of the Diet, or Japan's parliament, to persuade them to support the extension.

Fukuda's government has been blocked by the opposition, which controls the upper house of parliament and has argued that Japan should drop the mission because it doesn't have the approval of the United Nations.

The ruling party is now pushing a bill in parliament that would limit the operation to refueling ships involved in maritime anti-terrorism patrols, rather than warships linked to the fighting in Afghanistan.

Komura mentioned the Indian Ocean mission at the outset of his meeting with Gates, but the talks were then closed to the media. Gates was also to meet with Japanese Defense Minister Shigeru Ishiba later in the day and hold a joint news conference.

Officials traveling with Gates said Thursday that they also expected a great deal of discussion about six-nation talks that led to North Korea's move this week to begin disabling nuclear facilities at its main Yongbyon complex.

The issue was also a hot topic during Gates' meetings earlier this week in South Korea, where Defense Minister Kim Jang-soo declared that he sees no reduction in the threat from North Korea as yet.

In a speech Friday, Gates is expected to call on Japan, Washington's top ally in Asia, to "take more responsibility in global security matters in keeping with a country of their political, economic and military capacity," said one of the senior officials. They spoke on condition of anonymity because the meetings with Japanese leaders are private.

Senior defense officials stressed that this will not be a lobbying mission by Gates to overturn the Japanese decision on the tankers. But he will have lunch Friday with Japanese officials, including some in the main opposition party who oppose the Afghanistan mission.

The refueling ships were ordered home last week. The ships provided about 7 percent of the fuel for maritime patrols, and their loss will trigger additional costs and could force ships to refuel on shore, which could put some drain on patrols.

The move is not expected to have a major impact on American operations, but the White House said it would like Japan to reconsider.

Japan also sent ground troops to southern Iraq in 2004-06 to provide humanitarian support following the U.S.-led invasion of that country.

Gates' visit also comes on the heels of a successful ballistic missile test earlier this week above the Pacific Ocean that included the participation of the Japanese navy. The U.S. military shot down two missiles at once, while a Japanese navy Aegis-equipped ship, the Kongo, tracked the missile targets. The Aegis is an integrated radar and missile defense system.

The Kongo also simulated firing its own interceptors in preparation for another test off Hawaii next month in which it will attempt to intercept a missile itself. If successful, the event would mark the first time Japan has ever intercepted a ballistic missile.

Tokyo has poured money into missile defense in the decade since North Korea unexpectedly test-fired a long-range missile over northern Japan in 1998.

"We agreed that it is important for China, as a responsible member of the international community, to achieve more transparency about its military," he said.

About 50,000 U.S. troops are based in Japan under a bilateral security treaty. Many Japanese complain of crime, pollution and noise associated with the bases.