U.N. envoy Ibrahim Gambari met with pro-democracy leader Aung San Suu Kyi on Thursday - but there were signs his diplomatic mission to Myanmar had not been a resounding success. 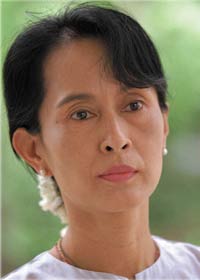 Witnesses saw a convoy of three cars, the last filled with riot police, drive Suu Kyi from the residence where she is under house arrest to a nearby state guest house where she met Gambari twice before. U.N. spokesman Aye Win confirmed that the envoy had gone to meet her.

After about an hour, Suu Kyi was driven home and Gambari was headed to Yangon airport. Details of their meeting were not immediately available.

However, the absence of a meeting between Gambari and top leader Senior Gen. Than Shwe - and Myanmar's rejection of a proposed three-way meeting involving Suu Kyi, a junta member and Gambari to promote reconciliation - suggested that Gambari's mission has accomplished little.

Gambari returned Thursday to Myanmar's largest city, Yangon, after several days of talks with government officials and other parties in the remote new capital of Naypyitaw.

The envoy, sent to Myanmar after the U.N. Security Council condemned a brutal crackdown on anti-government protests in September, met with recently appointed Prime Minister Gen. Thein Sein, the U.N. said in a statement from Yangon.

The statement said Gambari had delivered a letter from U.N. Secretary-General Ban Ki-moon and addressed to junta chief Senior Gen. Than Shwe - who had refused to receive Gambari.

The statement gave no details of the letter.

The U.N. statement said Gambari suggested to Thein Sein specific steps to satisfy international concerns about Myanmar's political deadlock, which began with the military's failure to hand over power to Suu Kyi's National League for Democracy party after it won a 1990 general election.

"These (steps) include the need for dialogue with the opposition without delay as part of an inclusive national reconciliation process, as well as necessary confidence-building measures in the humanitarian and socio-economic areas, including the establishment of a broad-based poverty alleviation commission," the U.N. statement said.

It said Thein Sein reiterated his government's support for Gambari's efforts and invited him to return to Myanmar.

The junta is expected to host the U.N.'s special investigator for human rights in Myanmar, Paulo Sergio Pinheiro, who has been invited for five-day visit starting Sunday.

During an early October visit to Myanmar, Gambari met with both Than Shwe and Suu Kyi, who is usually allowed no contact with outsiders under the terms of her house arrest.

She has spent 12 of the last 18 years in detention, and has been held continuously since the end of May 2003.

Security was tightened Thursday morning along the route from Yangon's airport and around the state guest house, where Gambari had earlier met Suu Kyi.

Organized supporters of the junta were stationed in small groups near the guest house. They have previously been used as strong-arms squads against dissidents - including in late September's crackdown, when the military killed at least 10 protesters and arrested thousands of people. Diplomats and dissidents say the death toll was much higher.

The junta's rejection of three-way talks with Suu Kyi and Gambari came during his Tuesday meeting with Information Minister Kyaw Hsan, the state-run New Light of Myanmar newspaper reported.

Kyaw Hsan told Gambari that his earlier visit "did not bear fruit as we had expected," and instead was followed by new sanctions from the United States, Australia and the European Union as well as condemnation from the U.N. Security Council, the newspaper said.

"I would like you to know that Myanmar is a small nation and if a big power bullies her ... we will have no other way but to face this and endure," Kyaw Hsan said.

The minister said Nobel laureate Suu Kyi had yet to respond to the government's request that she refrain from calling for international sanctions against Myanmar, a condition earlier set by the junta for talks with her.

Because she is cut off from communicating with the outside world, Suu Kyi's response to the initiative was not known.

Gambari arrived in Myanmar on Saturday and was set to leave later Thursday.