Bibles allowed for personal use only at the Beijing Olympics

Organizers of the Beijing Olympics try to suppress rumors that Bibles would be banned during the Games next year. They say that religious publications for personal use are allowed. 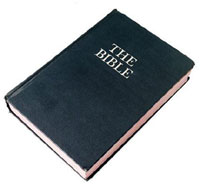 Bibles allowed for personal use only at the Beijing Olympics

The reports of a Bible ban caused alarm in the United States - which accuses China of restricting religious freedom - and led one U.S. lawmaker to raise the issue with the Chinese Embassy in Washington .

"We do not have such regulations. Foreigners can bring religious publications and things if it's for one's own use," said Du Mengxue, who works in the media center of the Beijing Olympics organizing committee.

A notice on the official Beijing Olympics Web site explaining entry procedures into the country said "each traveler is recommended to take no more than one Bible into China."

The Catholic News Agency published a report last week citing the Italian sports newspaper La Gazzetta dello Sport and Spanish daily La Razon as saying that Bibles were on a list of "prohibited objects" in the Olympic village.

Organizers cited "security reasons" and banned athletes from bearing any kind of religious symbol at Olympic facilities, the report said.

Outcry following the reports prompted U.S. Senator Lindsey Graham, a Republican from South Carolina , to telephone the Chinese ambassador for an explanation.

"If true, it would be outrageous act of censorship that would be rejected and condemned by the entire international community and people of all religions," the senator said in a statement. "There is no value needed more in the world at this critical time in human history than religious tolerance."

"We have heard from the IOC and there will be no restriction on athletes bringing the Bible or any other religious book into the village for their personal use," Seibel said in a telephone interview from USOC offices in Colorado Springs .

Though organizers have said the Olympics would help improve human rights in China , the country has a checkered record of protecting religious freedoms. The U.S. has criticized China for cracking down on spiritual groups with harassment, arrests and even possibly torture.

Beijing has reportedly expelled more than 100 foreign missionaries in what critics say is an effort to "tighten control on Christian house churches prior to the 2008 Olympics," the report said.

China 's officially atheist government permits religious observance, but allows worship only in Communist Party-controlled churches, temples and mosques. Worship outside that official structure, such as at Tibetan Buddhist retreats or home churches, is banned, and organizers face harassment, arrest and terms in labor camps or prison.

Members of the Falun Gong spiritual sect, which China calls an "evil cult," faced arrest, detention, and "there have been credible reports of deaths due to torture and abuse," the U.S. report said.