Iranian troops have killed three foreigners said to be members of a Kurdish armed separatist group, the official IRAN newspaper reported on Thursday. 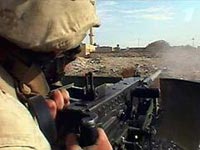 The three were killed in the town Kamyaran in Iran's Kurdistan province, some 500 kilometers (310 miles) southwest of the capital, Tehran. The report gave no details nor did it specify the timing or the circumstances of the deaths.

It also did not provide identities of the three or their gender, but only said they were nationals from a neighboring country and members of the separatist Kurdish group PEJAK, or Free Life Party of Kurdistan.

PEJAK is an offshoot of the rebel Kurdistan Workers' Party, or PKK - a Kurdish separatist group fighting authorities in neighboring Turkey which Washington and the European Union have labeled a terrorist group.

The fighting in southeastern Turkey between government forces and the guerrillas has been going on since 1984 and has claimed nearly 40,000 lives. It escalated sharply in October, with PKK fighters killing at least 42 people in the past month, including some 30 Turkish soldiers.

Ankara has pledged to pursue the PKK and the fighting has brought it to the brink of sending troops south across the border into Iraq.

For its part, PEJAK is struggling for autonomy for Iran's Kurds due to alleged Tehran government discrimination, and the mountainous Iran-Iraq border region has been the scene of sporadic clashes between PEJAK guerrillas and Iranian forces in recent years.

PEJAK and PKK bases in Iraq's Mount Qandil region, right on the border with Iran and Turkey, have long been a sore point in relations between the three countries.