Michael Jackson says he pays no attention to gossip and negative stories that people tell about him. 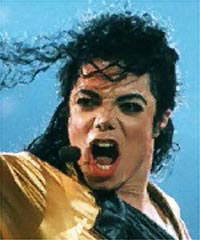 "I don't pay attention to that," the 49-year-old singer tells Ebony magazine. "In my opinion, it's ignorance. It's usually not based on fact. ... Every neighborhood has the guy who you don't see, so you gossip about him. You see those stories about him, there's the myth that he did this or he did that. People are crazy!"

Jackson, a twice-divorced father of three, says he has not changed all that much since releasing his blockbuster album "Thriller" nearly 25 years ago.

"That Michael is probably the same Michael here," he says in the magazine's December issue, on newsstands Monday. "I just wanted to get certain things accomplished first. But I always had this tug in the back of my head, the things I wanted to do, to raise children, have children. I'm enjoying it very much."

Jackson says success "came with a lot of pain."

"When you're on top of your game, when you're a pioneer, people come at you. ... But I feel grateful, all those record-breaking things, to the biggest albums, to those No. 1s, I still feel grateful," says the singer, who has sold more than 750 million albums worldwide.

What does he make of today's music?

"I don't think people are being as experimental and innovative enough," he says. "I know people can easily say, `Well, we don't have the Michael Jackson budget.' Wrong, you can be so creative with almost nothing. And that's usually the best stuff, when you strip it down to the bare minimum and go inside yourself and invent."

Jackson - whose last album, 2001's "Invincible," went double-platinum but failed to produce any monster hits - is reportedly collaborating with the likes of Kanye West for his forthcoming album, Ebony said.

"I always want to do music that influences and inspires each generation," he says. "Let's face it, who wants mortality? You want what you create to live, and I give my all in my work because I want it to live."

Jackson, meanwhile, could be facing the possibility of losing his Neverland Ranch in California because of delinquent payments on a $23 million ( EUR 15.6 million) loan, according to a notice of default posted on a television station's Web site.

Jackson no longer lives at the sprawling property in Los Olivos, California. The singer was acquitted in 2005 on child molestation charges and has lived in Bahrain, France and a castle in Ireland.