George W. Bush forces Pakistan military leader to hold parliamentary elections as soon as possible, and to shed his military uniform as Muslim security forces are going to protest against this rule. 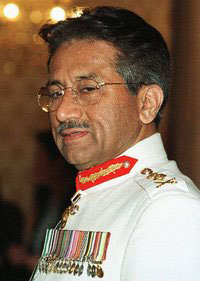 Bush, personally stepping into the political crisis for the first time, said he told President Gen. Pervez Musharraf in a 20-minute conversation: "You can't be the president and the head of the military at the same time."

For days, the White House has faced questions about why Bush was not taking a tougher line against Musharraf who - since Saturday - has suspended the constitution, ousted independent-minded judges, put a stranglehold on the media and arrested thousands of Pakistanis.

"My message was very plain, very easy to understand, and that is, the United States wants you to have the elections as scheduled and take your uniform off," Bush said during a news conference with French President Nicolas Sarkozy in the U.S. state of Virginia .

Pakistan reiterated its commitment to restoring democracy, but called on the international community to be patient, saying steps taken in recent days were vital to stability in the country of 160 million, which has been wracked by Taliban and al-Qaida-linked violence.

The country has been hit by a string of suicide bombings in its troubled northwest, the capital and elsewhere.

"We do listen to our friends, but we take decisions keeping in view the best interests of Pakistan ," said Deputy Information Minister Tariq Azi, a close aide of Musharraf.

Critics say Musharraf, who seized power in a 1999 coup, imposed the emergency measures to maintain his own grip on power. The moves came ahead of a Supreme Court ruling on the legality of his recent re-election as president.

Opposition leader Benazir Bhutto, meanwhile, urged party activists to protest, deepening uncertainty in the country. Her supporters, who clashed with police near Pakistan 's parliament on Wednesday, said they would hold a mass rally Friday in Rawalpindi , a city on Islamabad 's outskirts.

Rawalpindi Mayor Javed Akhlas said police would be out in force to prevent anyone reaching the park where Bhutto hoped to address supporters. "We will ensure that they don't violate the ban on rallies, and if they do it, the government will take action according to the law," he said.

Bhutto said she was willing to take that risk.

Musharraf says he suspended the constitution because the courts were hampering his efforts against extremist groups, such as by ordering the release of suspects held without charge. But most of the people rounded up in recent days have been human rights workers, political activists and lawyers.

Days of protests - most by lawyers angered by the attacks on the judiciary -have been quickly and sometimes brutally put down. Police in the southern city of Karachi were trying to arrest eight lawyers on treason charges for distributing anti-Musharraf leaflets. Conviction could bring death sentences.

Bhutto's decision to join in the protests added a new dimension to worsening political instability, as anger at military rule has spread.

With U.S. encouragement, Musharraf had been negotiating with Bhutto on forming an anti-militant political alliance and sharing power after parliamentary elections, which had been scheduled for January.

No new date for the polls has been set, though the government said it could be delayed by up to three months.

The talks resulted in the dropping of corruption charges against Bhutto, paving the way for her return last month.

But with the elections on hold, Bhutto has pulled back from negotiations. She said Musharraf's authoritarian ways have fueled extremism and destabilized the country, but that talks with him could resume if he ends emergency rule.