New romance:ex-Beatle and trucking heiress to be seen together

Paul McCartney has a new love interest, a New Jersey trucking heiress. They are to be seen together everywhere: at a sushi restaurant, a movie theater and a lingerie shop. On Wednesday, their photos walking along the beach appeared in newspapers, under the headline “TRYST AND SHOUT." 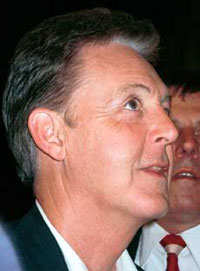 New romance:ex-Beatle and trucking heiress to be seen together

The shot of McCartney kissing Nancy Shevell in the front seat of his truck was published first by The Sun of London, but quickly made its way across the pond to the Daily News, the New York Post and Newsday.

Paparazzi outside Shevell's Upper East Side apartment in Manhattan snapped her picture as she left home Wednesday morning, her anonymity swept away by a burst of 21st-century Beatlemania.

Shevell, 47, and a member of the Metropolitan Transportation Authority board, is McCartney's latest apparent flame since his marriage to Heather Mills disintegrated last year. The rock 'n' roll Hall of Famer was previously spotted with high-profile dates Renee Zellweger, Christie Brinkley and Rosanna Arquette.

McCartney, whose songs as a Beatle and a solo act sold millions of records worldwide, opted to keep his mouth closed Wednesday about the tab two.

Out in the Hamptons, a famed resort community on Long Island where the couple did their bonding, local merchants were equally tightlipped. The owner of a British pub where McCartney occasionally stops for a drink declined to comment, as did workers at an assortment of local businesses: a pharmacy, a jewelry store and a gourmet deli.

Although the streets were fairly empty on a brisk November morning, nobody acknowledged seeing McCartney and Shevell in tandem _ or even separately. They instead observed the unwritten local rule that loose lips sink businesses in this summer haven for bold-faced names such as Steven Spielberg, Jerry Seinfeld, Sean "Diddy" Combs and Gwyneth Paltrow.

"The Hamptons are filled with celebrities," said Hamptons scene chronicler Steven Gaines, who is also the co-author of "The Love You Make: An Insider's Story of The Beatles." "This is a community that's very protective of those who live here."

McCartney is a veteran of the Hamptons scene, coming out for years with his wife Linda before her 1998 death from breast cancer. Gaines said McCartney prefers to stay after Labor Day, when things are more quiet and private.

"October is Paul's favorite month," he said. Or it was, it seems, until this November.

Shevell is estranged from her husband of 23 years, Long Island lawyer and politician Bruce Blakeman. She serves as a vice president for New England Motor Freight Inc., a New Jersey family business that was linked to the mob back in 1988.

Provenzano, a former Teamsters leader, has been identified as a prime suspect in the 1975 disappearance of ex-Teamsters boss Jimmy Hoffa. The case against Mike Shevell was settled with no admission of wrongdoing by Shevell, according to a report in the Village Voice.