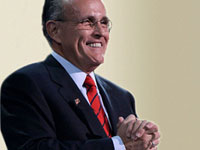 "It is my pleasure to announce my support for America's Mayor, Rudy Giuliani, a proven leader who is not afraid of what lies ahead and who will cast a hopeful vision for all Americans," Robertson said in a statement issued by the Giuliani campaign.

The former New York mayor backs abortion rights and gay rights, positions that put him in conflict with Republican orthodoxy, and has been trying to persuade cultural conservatives to overlook their differences with him on those issues.

Robertson made no mention of the differences on social conservative issues in the statement.

"Rudy Giuliani took a city that was in decline and considered ungovernable and reduced its violent crime, revitalized its core, dramatically lowered its taxes, cut through a welter of bureaucratic regulations, and did so in the spirit of bipartisanship which is so urgently needed in Washington today," Robertson said.

Conservatives have split in their support for the leading Republican candidates. Kansas Sen. Sam Brownback planned to endorse John McCain on Wednesday. Mitt Romney recently announced that Paul Weyrich and Bob Jones III were on board with his candidacy.

Robertson, who unsuccessfully ran for president in 1988, founded the Christian Broadcasting Network, the Christian Coalition and Regent University in Virginia Beach.