Arellano Felix under trial in US court

U.S. authorities captured Mexican drug lord Francisco Javier Arellano Felixin 15 months ago during a raid on a sportfishing yacht off the Baja California coast. The drug lord is set to be sentenced Monday in a federal courtroom. 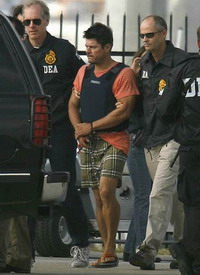 Arellano Felix under trial in US court

Arellano Felix, the youngest of the brothers who once ran a notoriously violent drug cartel , pleaded guilty Sept. 7 to running a criminal enterprise and conspiring to launder money. Those crimes carry a mandatory life sentence.

The Arellano Felix cartel emerged as a drug trafficking powerhouse in the 1980s in Tijuana, across the border from San Diego, though its influence is widely believed to have waned in recent years as its leaders have been killed or captured.

The cartel was once led by seven brothers and four sisters, but Francisco Javier's brother Ramon was killed in a shootout with police in 2002. His elder brother Benjamin was jailed in Mexico the same year; federal prosecutors in San Diego are seeking his extradition to face charges in the U.S.

Arellano Felix was seized in an August 2006 raid led by the U.S. Coast Guard off La Paz, Mexico, and towed back to San Diego aboard his 43-foot (13-meter) yacht, the Dock Holiday. The arrest at sea came after an intense manhunt, during which the State Department had offered a $5 million (3.45 million EUR) reward for the drug lord's capture.

Also aboard the boat was Arellano Felix's right-hand man, Manuel Arturo Villarreal Heredia, who pleaded guilty to racketeering and conspiracy to invest illicit drug profits. He faces up to 30 years in prison when he is sentenced in January.

Since their capture, Arellano Felix's older brother Francisco Rafael and two senior cartel capos have been extradited to the U.S. and sentenced on drug charges in San Diego.

According to his plea agreement, Arellano Felix and his partners murdered informants and potential witnesses and paid millions of dollars in bribes to law enforcement and military personnel.