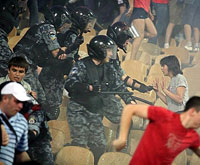 The brawl happened Sunday in the town of Bicske, some 40 kilometers (miles) west of Budapest, where 28 Cubans granted political asylum by Hungary have been living in a refugee camp since Oct. 9.

The brawl began after the two groups were caught up in a "misunderstanding," which also involved the girlfriend of one the Hungarians, Fejer County police spokeswoman Agnes R. Szabo said.

One of the locals suffered serious but not life-threatening stabs and cuts, while the two other Hungarians were slightly injured.

Police suspect the nine men of collectively disturbing the peace. A police investigation was ongoing and a decision whether to charge them will be made after it has been concluded.

Szabo said the Cubans were allowed to return to the refugee camp, where they are taking Hungarian language lessons and receiving counseling aimed at easing their transition to life in Hungary.

A Hungarian immigration official told state news agency MTI that the Cubans' refugee status would not be influenced by the outcome of the police investigation.

Earlier this year, Cuba said Hungary was an "an accomplice to the empire" for agreeing to take the refugees, who had been picked up at sea by the U.S. Coast Guard and held at Guantanamo Bay.