A Canadian clinical study found last month that the consumption of antibleeding drug Trasylol could be linked to a higher risk of death than other drugs. And so drugmaker Bayer AG said Monday that it has halted the global sales of Trasylol. 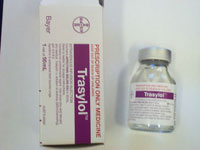 The drug is designed to stem blood loss and enable patients receiving heart bypass surgery to avoid the use of transfusions.

Leverkusen-based Bayer said it made the decision after talks with the U.S. Food and Drug Administration, the German Federal Institute for Drugs and Medicine Products along with Health Canada.

Last week, the FDA said that accumulating evidence had suggested that Trasylol increased the risk of death when compared to other drugs.

The U.S. government later asked Bayer to suspend sales of the drug, more than a month after FDA advisers recommended Trasylol remain on the market despite its links to an increased risk of death and other serious side effects.

The announcement came as a Canadian study comparing the safety and efficacy of Trasylol with two others was halted. Preliminary results from that trial also suggested Trasylol increased the risk of death when compared with the other drugs. The trial was to include 3,000 patients.

In a conference call with reporters, Dr. John Jenkins of the FDA's Center for Drug Evaluation said the agency had sought the suspension last week after reviewing the results of the study.

"FDA will be working with Bayer over the next several days to implement the details of the suspension, which will include a slow phase-out of Trasylol in the market place," he said.

The FDA does not have the regulatory authority to order a suspension of sales, but its German counterpart does.

Jenkins said the FDA had talked with its counterparts in Canada and Germany about the drug, which is used for patients with a high risk of bleeding who are undergoing coronary artery bypass grafting surgery with cardiopulmonary bypass.

"We were aware the Germans were considering a market suspension, which they did announce this morning," he said. "However, FDA's decision was made independently."

The FDA approved the drug in 1993 to stanch the loss of blood and prevent the need for blood transfusions in surgeries to bypass clogged coronary arteries. The agency began re-evaluating the drug's safety after the January 2006 publication of two studies that linked the drug's use to serious side effects, including kidney problems, heart attacks and strokes.

More recent studies have suggested the drug also raises the risk of death. One of those studies previously was withheld by Bayer from the FDA due to what a company investigation later characterized as a "regrettable human error."

There are not many treatment options for patients at risk for excessive bleeding during cardiac surgery, the FDA noted in its announcement. The agency said it was working with Bayer to phase Trasylol out of the marketplace in a way that does not cause shortages of other drugs used for this purpose.

Bayer said it wanted to review the results from the Canadian trials before moving forward.

"Once the complete ... dataset is available, Bayer will work with health authorities to evaluate whether these data have any impact on the positive benefit-risk assessment for Trasylol," the company said. "At that time the temporary marketing suspension will be reevaluated."