Saudi officials cut off the right hand of the Egyptian for pocket-picking inside most revered shrine in Mecca according to Islamic laws. 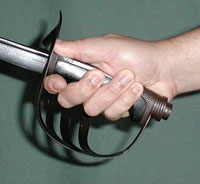 In a statement carried by the official Saudi Press Agency, the ministry said that Amr Mohammed Zarif Nasr's right hand was cut off from the wrist in the holy city of Mecca according to Islamic laws.

The amputation, performed with a sword, is the first such punishment to be carried out in three years in Saudi Arabia. In 2004, Saudi authorities severed the right hand of a Nigerian, also convicted of theft.

Islamic laws provide that if a felon relapses in the same crime and is again convicted of theft, his left hand should also be amputated.

The Kaaba is a cube-shaped stone structure draped in black cloth that Muslims around the world face during daily prayers. Muslims believe Abraham built it. The structure and the Grand Mosque built around it are Islamic holiest site.

Egyptian newspapers have reported that dozens of Egyptian pickpockets usually travel to Saudi Arabia among millions of other Muslim pilgrims during the annual Hajj or in the holy month of Ramadan.

Saudi Arabia, a conservative kingdom, follows a strict interpretation of Islamic law that calls for amputation for crimes of theft. Those convicted of murder, drug trafficking, rape and armed robbery are beheaded in public with a sword.

Saudi Arabia executed 127 people this year, according to a count by The Associated Press. Saudi Arabia beheaded 38 people last year and 83 people in 2005.