The Web page of Chile's presidency was cracked. A hacker planted the flag of neighboring Peru, leaving the site inoperable on Monday. 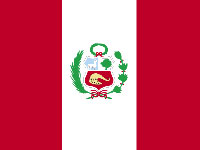 The intruder left a message - "Long live Peru," followed by an expletive - as well as the flag around midday Sunday. Officials took the site down a few minutes later.

Visitors to the site on Monday found a notice: "Because we want to give a better service, we are working for you."

Carlos Portales, political director of the Chilean foreign ministry, said the incident is being investigated.

"It has happened with other Web pages, including some from the United States government, the Vatican," Portales told reporters.

The Santiago daily El Mercurio on Monday reported that officials believe the hacker was a Peruvian.

While Chile and Peru have generally friendly relations, tension sporadically breaks out over the aftermath of two 19th century wars between the countries and a dispute over maritime boundaries has been developing.

The Web page carried information about activities of President Michelle Bachelet and about the upcoming Ibero American Summit for leaders from throughout Latin America, Spain and Portugal. Portales said the incident does not appear related to the summit.