Thousands of opposition supporters protested for a fourth straight day Monday in Tbilisi, Georgia's capital. They encircled parliament and President Mikhail Saakashvili's office and demanded him to step down. 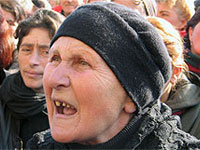 Some 10,000 people were gathered in front of the parliament building, with more proteters arriving as the standoff persists in the former Soviet republic, with Saakashvili facing the stiffest challenge since his election following the "Rose Revolution" four years ago.

Opponents of Saakashvili - many of them former allies - have led daily rallies on the capital's main thoroughfare since Friday, when more than 100,000 gathered. Protesters initially demanded the president annul a decision to move next year's parliamentary elections back by several months and reform the election system, but now they are also calling for his resignation.

In a show of strength, protesters formed a human ring around the parliament, the president's headquarters a few hundred meters (yards) away and a handful of other buildings, shouting: "Misha, go away!"

"If we supported the use of force, we could have long ago taken the parliament building by force, but we did not and do not plan to do that," said Georgy Khaindrava, a former minister in Saakashvili's Cabinet who is now an opposition leader. "We will use only peaceful methods."

Police and security forces stood by but did not confront the protesters. Presidential administration officials said Saakashvili was working in his office as usual.

In addition to crowds outside parliament and the president's office, opposition supporters formed corridors at the entrances to the Interior Ministry, in charge of law enforcement, and other government buildings, handing employees heading in and out invitations to join the protest.

Several opposition leaders announced they were starting hunger strikes and would continue until their demands are met.

But Saakashvili rejected the demands Sunday in his first public remarks on the standoff, saying the parliamentary elections would be held as planned and that - far from stepping down - he would run for a second term in a presidential vote expected in late 2008. He suggested Russia was fomenting the unrest, a claim that angered his opponents.

"Yesterday he did not speak to his people, as a president must," said opposition Republican Party leader David Usupashvili. He said the opposition would only hold talks with parliament speaker Nino Burdzhanadze, a Saakashvili ally who said Monday that she had met with opposition lawmakers to discuss the confrontation.

"Both sides want dialogue, so all the issues can be resolved in a civilized way," she said.

He suggested opponents wanted to turn back the clock to the era before he was swept to power in the Rose Revolution - massive protests over alleged election fraud in late 2003 that prompted the resignation of longtime President Eduard Shevardnadze.

Elected by a landslide in January 2004, Saakashvili has sought to decrease Russia's influence on the small, economically struggling Caucasus Mountain nation and establish central government control over two separatist regions that have run their own affairs, with Russian support, since wars in the early 1990s.

Saakashvili also has courted the United States and the European Union, vowing to integrate the country into Western institutions such as NATO.

Most of Saakashvili's opponents support these aims, but they accuse him of increasingly authoritarian rule. In addition to his resignation and parliamentary elections in April instead of several months later, protesters are demanding changes to an election system they say is skewed in his favor, and urging the release of what opposition leaders call political prisoners.