Nobel Peace Prize winner Al Gore will be drafted as a Democratic presidential candidate with the help of television ad on CNN and in New Hampshire. 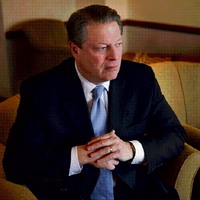 The 30-second spot by DraftGore.com will hit the airwaves Friday. The former vice president, who recently was a co-winner of the Nobel for his efforts to publicize global warming, has rebuffed efforts to persuade him to enter the contest.

The ad may not do much good in New Hampshire, where it is scheduled to run for three days. Friday is the deadline for candidates to file for a ballot position in the New Hampshire primary.

"I'm afraid we're very much aware of that," said DraftGore founder Monica Friedlander. She said the group needed to raise funds and was unable to get rights to certain Gore speeches, delaying the ad's production.

In the ad, an announcer says: "Imagine what tomorrow can be. Imagine a renewed world, an end to the war in Iraq. Imagine Al Gore as president ... Call him. Write him. Seize the moment"

The ad reminds viewers that Gore -who lost a contested race for the presidency to George W. Bush -first opposed the war in Iraq in September 2002 and makes note of his share of the Nobel Peace Prize, which was announced last month. Gore also won an Academy Award for his global warming documentary "An Inconvenient Truth."

"I believe our success in defending ourselves depends precisely on not giving up what we stand for," Gore says in a clip taken from a rally leading up to the 2000 convention.

DraftGore spent about $50,000 (34,700 EUR) on the ads, which will run on CNN for five days and on station WMUR in Manchester, New Hampshire, from Friday through Sunday.

Friedlander said that if Gore were to decide to run and files for primaries that come after New Hampshire, her group would try to mount a write-in campaign in New Hampshire.