The White House took the part of Arab-Americans who disliked a memo that former Defense Secretary Donald Rumsfeld wrote saying that "oil wealth has made Muslims averse to physical labor." 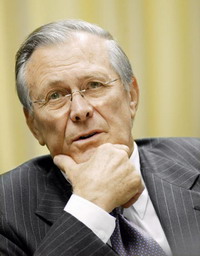 Rumsfeld's belief is "not at all in line with the president's views," White House press secretary Dana Perino said.

As Pentagon chief, Rumsfeld wrote scores of internal memos which employees called "snowflakes." In May 2004, Rumsfeld wrote that oil wealth had left Muslims detached from the "reality of the work and investment that leads to wealth for the rest of the world."

"Too often Muslims are against physical labor, so they bring in Koreans and Pakistanis while their young people remain unemployed," Rumsfeld wrote in one of several memos published by The Washington Post. "An unemployed population is easy to recruit to radicalism."

Asked about Rumsfeld's memo, Perino acknowledged that some Arab-American groups took offense to his comment.

"We are aware that we have a lot of work to do in order to win hearts and minds across the Arab world and the Muslim world and I can understand why they would be offended by those comments," she said.

Ibrahim Hooper, a spokesman for the Council on American-Islamic Relations, said Rumsfeld's comment reflects the "stereotypical attitude" that led the United States to invade Iraq.

"Our policy was never based on reality," Hooper said. "It was based on the wild ideas of those who wanted to invade the region. ... It shows you what kind of wrong-headed policymakers we had at the time."