8 Italians get into road accident in southern Sinai

4 Italian tourists were killed and 4 others injured Thursday when their minibus collided with a truck near the Red Sea resort town of Sharm el-Sheik on the southern Sinai Peninsula. The group's Egyptian driver was also injured. 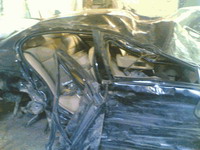 8 Italians get into road accident in southern Sinai

The accident occurred some 15 kilometers (9 miles) outside the town center as the Italian tourists were returning to their hotel, said Ibrahim Ali Hassan, an emergency room doctor in southern Sinai.

Police said a truck driver lost control of his vehicle on a one-lane road and collided head-on with the minibus.

The names of the Italians were not released, and an Italian Embassy official in Cairo said he had not yet received confirmation of the accident from the Egyptian government.

Deadly road accidents are common in Egypt and tend to be blamed on poorly maintained vehicles, bad roads and lack of respect for traffic regulations. Latest official figures published showed that more than 6,000 people were killed in 2006 in traffic accidents.