Scandinavian Airlines System turboprop made a crash landing because of a piece of rubber stuck in the landing gear. 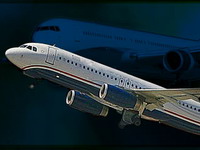 SAS dropped its entire fleet of Bombardier Q400 planes after the incident in Copenhagen, which was the third accident blamed on landing gear problems in seven weeks. Although no one was seriously injured, the airline said the accidents had damaged confidence in the planes.

In Saturday's crash landing, a SAS turboprop slid down the runway on its belly when its landing gear collapsed after touchdown.

Denmark's Accident Investigation Board said the accident was caused by a rubber ring that was stuck inside the landing gear, preventing it from extending properly.

Investigators said the ring did not belong in the system, but were not sure when it was introduced. They said it could not be ruled out that it came in by mistake during the maintenance checks ordered by SAS on all its turboprops after the first two accidents in September.

Canadian aircraft maker Bombardier said in a statement on Sunday that it was "disappointed" that SAS pulled the planes because Danish authorities had not yet closed an investigation into Saturday's crash landing.

The company stuck by an earlier assessment that found no systemic problem with the landing gear.

SAS spokesman Bertil Ternert said the findings by the Danish investigators did not change the airline's decision to drop its 27 turboprops.

"We have had three accidents with this aircraft," he said. "And we are awaiting for the final conclusions of the accident commission. They know the cause (of the crash) but they are not sure how this ring entered the system."

On Sept. 9, one of SAS' Q400 aircraft caught fire after making an emergency landing at Aalborg's airport in Denmark.

Three days later, another aircraft of the same type skidded off a runway at Vilnius airport in Lithuania and smashed one wing into the ground, also during an emergency landing.