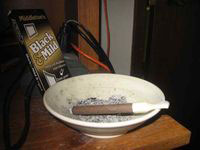 Altria has looked for products, such as cigars and smokeless tobacco, to replace the losses. Altria Group owns Philip Morris USA, maker of brands like Marlboro, Virginia Slims, Parliament and Basic, and started earlier this year to use its recognizable Marlboro brand to test market smokeless products in the Dallas/Fort Worth and Atlanta metropolitan areas.

"It fits squarely with our announced strategy to grow our U.S. tobacco business beyond cigarettes and complements our recent initiatives in the smokeless category," Philip Morris USA chief executive Michael Szymanczyk said in a statement. In the third quarter, domestic cigarette volume declined between 3 percent to 4 percent.

The company said it will finance the deal with existing cash. Altria is buying John Middleton from privately held Bradford Holdings.

"The business provides a growing stream of operating income to Altria's very mature U.S. cigarette franchise, as well as a broader platform for future growth," Morgan Stanley analyst David Adelman told investors in a research note. He criticized Altria for paying what he said was "full price," however.

The acquisition comes as Altria prepares to spin off its Philip Morris International division. The board is expected to announce the exact timing of the spinoff on Jan. 30. The split, analysts say, would free the international unit to more aggressively pursue sales in emerging markets without the legal and regulatory constraints the U.S. unit faces.

John Middleton makes large machine-made cigars. The research group Information Resources Inc. estimates the company holds about 24 percent of the total retail cigar market in the U.S. Nearly all of its share, or 23 percent of the total market, comes from its Black & Mild brand.

Altria estimated the growth rate for large machine-made cigars was 4 percent annually from 2003 to 2007.

Altria's break-up plans call for consolidating domestic cigarette production in Richmond, Virginia, and moving all international manufacturing to plants outside the U.S. Philip Morris International is based in Lausanne, Switzerland.

The spin off of Philip Morris International is the next step in a restructuring that started with the spin-off of its majority stake in Kraft Foods Inc. in March.

Altria, the parent company now based in New York, will move its headquarters to Richmond, where Philip Morris USA is located, and cut 400 jobs. It has also opened a research center in Richmond to develop new products to replace cigarettes.