A Dutch court forbade a pedophile support Web site to distribute pictures of the Royal Family children. A week after it posted photos of the 3-year-old daughter of the heir. 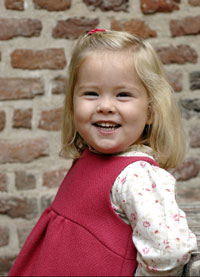 The Amsterdam District Court said the photos on the site of the group Martijn violated the privacy of the nation's first family and was "a breach of the portrait rights of the children."

The court said it took into account "the character of the Martijn web site" in granting the injunction sought by the House of Orange.

A member of Martijn last week posted pictures of Princess Amalia, daughter of Crown Prince Willem-Alexander and his wife Princess Maxima, and of their 5-year-old nephew Lucas.

Some of the pictures were on the site's public site and others were on its members-only, password-protected forum. The pictures had been taken from the Royal House's own Web site.

Under Dutch law, photographers own copyright of photos they have taken, but the person photographed has so-called portrait rights under which he or she can prevent other people using the image. The royal Web site allows its photos to be downloaded for legitimate noncommercial use.

Similar rules exist in most parts of the world to prevent a person's likeness from being used for advertising purposes without approval.

Martijn, a group that says it lobbies for acceptance of consensual physical relationships between adults and children, could not immediately be contacted for comment, but it closed down the public forum section of its Web site where some of the pictures appeared last week before the ruling.

"To avoid possible fines, the forum was closed," a message posted on the site said. "Depending on the ruling, the forum will be reopened or will remain closed to install modified software."

Earlier this week, during a visit to Bhutan, Willem-Alexander harshly criticized the group for using the pictures.

"I have no words for this kind of child abuse," he said. "Luckily, I didn't see it, because if I had, I'd have gone crazy and probably would not have been able to react reasonably."

He said the Royal House launched legal action to prevent any repeat of the incident for his and other families.

"We hope we can create a legal precedent so that other parents do not have to see their children on such a site."