The mother of a teenager who was sexually assaulted is outraged that Dubai authorities lay her a defendant in the case was not HIV positive, when the man already had tested positive. 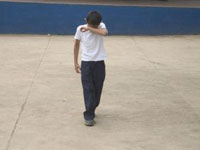 Veronique Robert, the mother, also said in an interview with The Associated Press in Paris that her 15-year-old son remains deeply shaken by the July assault, and said she believed Dubai officials gave incorrect information about the defendant's HIV status because they were trying to cover up any links to AIDS in the country. The AP is using her name with her agreement, but is not identifying the son.

Critics have said the case reveals a deeply flawed legal system, but Dubai officials have defended their handling of the case.

Two Emirati men are on trial in Dubai, charged with kidnapping the teenager and another French boy, who were headed home from a shopping mall at the time of the alleged July attack.

The defendants - aged 35 and 18 - briefly appeared in court on Wednesday where one was appointed a new lawyer. The other defendant's attorney did not appear in court for the hearing, which lasted a few minutes before the judge adjourned the trial until next week.

The two are accused of kidnapping the boys and sexually assaulting one of them - a 15-year-old - in July. A third defendant, also accused of taking part in the assault and also Emirati, is being tried in a juvenile court, where the proceedings are closed to the public.

Last week, the two adult defendants pleaded not guilty to charges of kidnapping with deceit and to illicit sexual intercourse.

According to court documents, the 35-year-old defendant has been identified as HIV positive.

The charges against the two adult defendants carry the death penalty if convicted. It was not immediately clear what sentence the third defendant, the minor, would face if convicted in juvenile court. The Emirates' legal system prohibits the media from naming the defendants until a verdict is reached in the case.

The case has garnered much attention and controversy here in this booming Gulf tourist hub, which boasts of its prosperous economy, relatively moderate lifestyles and fair commercial and criminal legal systems.

But some expatriates here - both affluent working managers and low-paid laborers - have long complained that foreigners have few legal rights. Emirati citizens are far outnumbered by foreign workers and expatriates, mostly from Asia but also from Europe.

Dubai, like much of the Arab world, also remains largely hostile to homosexuality. The UAE legal system does not recognizerape of men as a crime, only rape of women, although prosecutors can bring other charges in the case of a sexual assault against a man, as they have in the French-Swiss teen-ager's case.

Robert, the mother, said Dubai officials failed to tell the family that one defendant previously had tested positive for the AIDS virus.

She also said that a police physician tried to pressure the boy to say he was a homosexual, immediately after the attack. He now lives in Switzerland.

Robert, on a Web site she has set up, has called on people to press Dubai to take basic steps to protect underage rape victims, such as ensuring they are tested for infectious diseases immediately after an attack.

Dubai officials deny they have mishandled the case and say they treat fairly both Emiratis and foreigners living in Dubai.

But the case also has caused tension between the French government and United Arab Emirates officials.

A French diplomatic official in Paris, who spoke on condition of anonymity, said French officials had asked Dubai to do everything possible so that the attackers are held responsible in court, and said officials have taken advantage of every high-level contact with Dubai to raise the issue.

The official spoke on condition of anonymity, as is usual among French diplomatic officials.

Dubai is one of seven semiautonomous city-states that make up the UAE.

According to court documents, the alleged July attack began when the juvenile defendant offered the two boys, one of whom he knew slightly, a ride home from a Dubai mall.

The two boys got in the car but were later joined by the other two adult defendants, the documents said.

During the ride, one of the boys is said to have dialed the number of the police on his mobile, but the suspects heard it and confiscated cell phones from both boys.

The group drove to the edge of the Dubai desert, where the three defendants allegedly threatened the boys and took turns sexually assaulting one of them in the car, while the other boy was told to stay behind a sand dune, according to the court documents.

The documents say the victims later told the police that one of the suspects verbally threatened them, saying he would "burn down your house and burn your parents after I've had sex with your mother."

After the attack, the two boys managed to get a taxi home. They reported the assault to the police who launched a massive hunt and arrested all three suspect the same day, court documents said.

The judge on Wednesday set another hearing for Nov. 7.