Man smuggles box cutter on board

Police arrested 2 men at Hartsfield-Jackson Atlanta International Airport. One of them boarded a flight bound for India with a box cutter in his carry-on luggage, and was discovered only after airport screeners stopped a companion who was carrying knives. 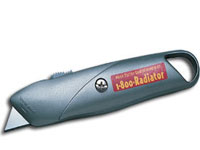 Man smuggles box cutter on board

Authorities said Chhaganbhai Patel, 60, was stopped at Hartsfield-Jackson Atlanta International Airport on Oct. 25 after he was found with a number of knives including a martial arts-style knife.

Shakarabhai Patel, 64, who was traveling with him, had already made it through security and onto the Delta Air Lines jet, which was bound for New York and then to India, authorities said. The plane - which was bound for India with a stop in New York - was brought back to the gate and police said a box cutter and $5,000 (€3,466) cash were found in the second man's bag.

Both have been charged with state violations of carrying concealed weapons, according to an Atlanta police report. Officials did not say what their nationalities were.

FBI spokesman Stephen Emmett said Thursday that federal agents interviewed the two men through an interpreter and determined the incident was not terrorism-related. No federal charges were brought. He declined to explain why the men had the knives.

"The (martial arts) knife was a large, Chinese-style fighting knife," Corlino said. Authorities said they also found 20 small knives wrapped in tin foil and razor blades hidden in the battery compartment of a toy car. The police report said the man indicated he wrapped the knives to keep them from cutting his clothes.

Jon Allen, spokesman for the Transportation Security Administration, said the arrests illustrate the agency's practice of having multiple layers of security.

It was not immediately clear if the men had lawyers; police did not return calls seeking more details.