Police searching for teacher and her boyfriend

A 13-year-old boy and a female teacher escaped after police began investigating an alleged intimate relationship between them. Nebraska authorities were searching the pair. 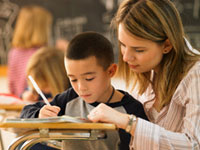 Police searching for teacher and her boyfriend

Kelsey Peterson, 25, a sixth-grade teacher and basketball coach at Lexington Middle School, was placed on administrative leave last week. A judge issued an arrest warrant Monday charging her with kidnapping, child abuse and contributing to the delinquency of a minor.

Authorities believed the two were traveling together and police nationwide were notified about them.

"We're still focused on locating both of them, whether they're together or not," Dawson County Attorney Elizabeth Waterman said Thursday. "I think right now anything is possible."

The boy was at student at the school, but it was not clear if Peterson was his teacher.

Court documents showed authorities had recovered several e-mails and letters in which the two professed their affection for one another.

In letters, the boy called Peterson his "Baby Gurl," and said their relationship was "just not about the sex but that it was pretty good," according to court documents.

Court documents say Peterson's school-issued laptop contained letters in which she said she loved the student.

Police said the boy contacted his family over the weekend and said the two were in Grand Island, about 85 miles (137 kilometers) east of Lexington, according to court documents. Police also said the pair were apparently spotted Friday night at a Denver convenience store, then again Sunday in Ogallala, in western Nebraska near the northeast tip of Colorado.