A plastic surgeon pleaded guilty to a federal charge of harboring and concealing a fugitive. He removed the fingerprints of an alleged drug dealer. 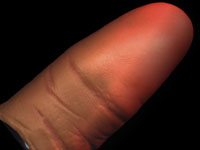 Dr. Jose L. Covarrubias, a U.S. citizen who lived in the border town of Nogales, Arizona, and practiced his medical specialty in neighboring Nogales, Mexico, faces a maximum sentence of five years.

Charges of conspiring to distribute marijuana and being an accomplice and accessory after the fact to marijuana dealing were dismissed as part of the plea agreement approved by U.S. District Judge Yvette Kane.

Covarrubias, 49, was indicted by a grand jury in Harrisburg for his involvement with a Harrisburg-based drug ring that prosecutors said conspired to buy marijuana from Tucson, Arizona, and elsewhere and then distribute more than a ton of it in Pennsylvania and other areas. He was arrested in May while trying to cross the U.S.-Mexico border.

Covarrubias was returned to Adams County Jail in Gettysburg, where he has been held since May. Sentencing was scheduled for Feb. 11.