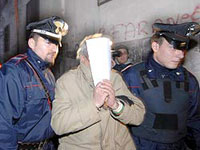 In line with privacy laws, Hage identified the suspect only as a 60-year-old "leading member of the Camorra," the Naples-based crime syndicate. But the Italian news agency ANSA said he was Giuseppe De Tommaso, also known as "Dirty Dozen," and said he is suspected of cocaine smuggling.

Dutch police were tipped off by their Italian colleagues that the man could be in the nearby city of Haarlem and launched an investigation that tracked him down to Zandvoort, where he was living under a false name, Hage said.

The man was jailed awaiting extradition to Italy.

It is not the first time Dutch police have arrested suspected gangsters from the Camorra, a gang that controls drug and arms trafficking, prostitution, extortion and illegal betting rackets in the Naples area.

A year ago, four Italians - two of them alleged high-ranking Camorra members - were arrested here in raids that also uncovered 35 kilograms (77 pounds) of narcotics, more than €2 million in cash and a pair of firearms.