Circumcision to take place in prison

An Israeli court denied a request by Prime Minister Yitzhak Rabin's assassin to leave jail to attend the circumcision of his infant son. It was allowed to enact the ceremony in the prison where he is held. 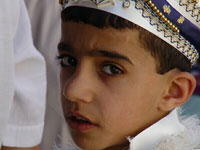 Circumcision to take place in prison

The boy is to be circumcised on Sunday. The day coincides with the 12th anniversary of the Israeli leader's slaying.

Amir, an Orthodox Jew, shot Rabin to death after a peace rally on Nov. 4, 1995, because he opposed the prime minister's policy of ceding West Bank land for peace with the Palestinians. He was sentenced to life in prison.

Although he is held in isolation, Amir has been permitted conjugal visits over the past year with his wife, Larissa Trimbobler, whom he married while in prison. The boy was born on Sunday, and according to Jewish tradition, a healthy Jewish male is circumcised eight days after his birth.

Circumcision is a major event in a Jewish boy's life, and Amir - who in the past 12 years has left prison only to appear in court - asked for dispensation to attend the ceremony.

A Tel Aviv judge ruled that while some murderers are allowed furlough to attend the circumcisions of their sons, the extraordinary gravity of Amir's crime made him ineligible. But he overrode the prison service's opposition to allowing the ceremony to take place in the jail in central Israel where he is held, saying there was no legal basis to prevent Amir from holding the ceremony.

The boy, whose name won't be disclosed until the circumcision, was born at a time of growing sympathy for commuting Amir's sentence. Israeli extremists and Amir's family have launched a campaign to have him released from prison. Stickers, posters and 150,000 copies of a video featuring his mother, wife and supporters vowing to free him by next spring have been circulated.

The pro-clemency movement has support beyond Israel's fringe. A recent newspaper poll indicated about a quarter of Israelis, including almost half of religiously observant Jews, think Amir should be pardoned in 2015 after serving 20 years.

Clemency is the prerogative of Israel's president.

President Shimon Peres, who was Rabin's foreign minister and just a few steps away when the Israeli leader was gunned down, has said Amir shouldn't be pardoned. Many other prominent Israelis also have condemned the pro-Amir movement, and Rabin's daughter said Amir should have been executed.