Turkish forces to only target Kurdish guerrilla fighters in Iraq 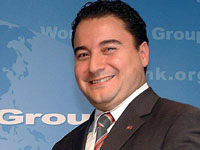 Turkish forces to only target Kurdish guerrilla fighters in Iraq

If Turkish forces break into Iraq they will only target Kurdish guerrilla fighters and their bases and it “would not be an invasion,” Turkey's foreign minister said Thursday.

Ali Babacan said an upcoming meeting Monday between Prime Minister Recep Tayyip Erdogan and U.S. President George W. Bush "will determine the steps that Turkey would take." But if Turkey sends its troops into Iraq, "any cross-border attack would be aimed at hitting terrorist bases and would not be an invasion," he said.

Still, he indicated growing frustration with the government of the semiautonomous Kurdish region of northern Iraq, accusing it of inaction against the rebels, who stage attacks on Turkey.

"We have doubts about the sincerity of the administration in northern Iraq in the struggle against the terrorist organization," Babacan said. "We want to see solid steps - we hope our point of contacts understand the seriousness of this job."

He also said some economic measures aimed at rebels of the Kurdistan Workers' Party, or PKK, in northern Iraq have already been put in place, and Turkey is also considering stopping flights to the region.

"They are carefully evaluated and aimed at the economic resources of the terrorist organization and those who give support to it, and some measures have already been put in place," Babacan said.

"We are not going to announce them, but will implement them when needed," he said, elaborating only to say that flights to northern Iraq "might be" restricted as well.

"We have all kinds of options on the table against the PKK right now," Babacan said.

He said any economic measures put in place would be targeted specifically at the rebel fighters.

"We would not want to hurt either the Iraqi people or the people living in Turkey with these economic measures," Babacan said. "They are carefully evaluated and aimed at the economic resources of the terrorist organization and those who give support to it."