Hollywood involved in war - between writers and producers 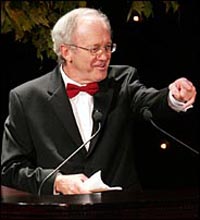 Hollywood involved in war - between writers and producers

Both Hollywood writes and producers are happy ending professionals, but this time they can fail. Talks between the sides have reached a cliffhanger.

A strike could happen as early as Friday, with writers meeting Thursday night to discuss whether to walk out or continue to work without a contract while seeking a deal.

Their contract expired at midnight Wednesday after talks ended abruptly, with both sides saying they were still far apart on the key issue of raising payment from the sale of DVDs and extending payment to the distribution of TV shows and film over the Internet. No new talks were scheduled for Thursday.

While both sides have withdrawn other proposals since talks began in July, neither has budged on what the Writers Guild of America termed "the hated DVD formula," which pays writers pennies on the sale of home video.

Writers had sought to boost that payment. They wanted the richer formula applied equally to the sale of digital downloads. They were also seeking a piece of advertising dollars generated when TV shows and films are streamed for free over the Internet.

Writers also want to be paid for creating original content for the Internet, cell phones or other digital devices.

Producers maintain that profits from DVDs largely offset the increased cost of production. They also don't want to commit themselves to higher payment for digital distribution at a time when business models are still uncertain.

"The magnitude of that proposal alone is blocking us from making any further progress," J. Nicholas Counter, president of the Alliance of Motion Picture and Television Producers, told writers Wednesday.

"We cannot move further as long as that issue remains on the table. In short, the DVD issue is a complete roadblock to any further progress."

The issue is key to the industry because actors also are expected to fight for a larger share of DVD and digital revenue when their contract expires in June.

While the WGA leadership has authority to call a strike, it is expected to give negotiations one last try.

Jonathan Handel, an entertainment lawyer at the Los Angeles law firm of TroyGould, said it was in the union's interest to delay a walkout, perhaps by five days or more.

"The writers guild has two weapons: One is a strike, the other is the threat of a strike. It has no reason to toss that weapon away without using it for a bit," Handel said.

If writers do strike, the first casualty would likely be late-night talk shows, which are dependent on current events to fuel monologues and other entertainment and almost certainly would be forced into reruns.

"If the strike happens, we are very likely looking at repeats for both shows," said Tony Fox, a spokesman for Comedy Central, which airs "The Daily Show with Jon Stewart" and "The Colbert Report," which lampoon political doings of the day.

NBC declined to comment but a person with the network, who was not authorized to comment and spoke on condition of anonymity, said "Tonight" and other NBC late-night shows likely resort to repeats.

CBS declined comment on the possible fate of "The Late Show with David Letterman."

A strike would not immediately affect film or prime-time TV production. Most studios have stockpiled dozens of movie scripts, and TV shows have enough scripts or completed shows in hand to last until early next year.

After that, networks might turn to reality shows, news programs and reruns to fill the prime-time airwaves.