Bode Miller will probably race the season-opening World Cup race this weekend despite his back injury. 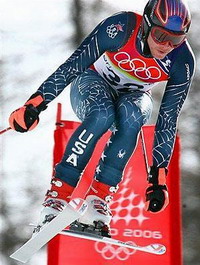 The 2005 overall World Cup champion, who split with the U.S. ski team and went independent this season, hurt his back skiing earlier this month and had been in doubt for Sunday's giant slalom.

The World Cup season starts this weekend on the Rettenbach glacier, with a women's giant slalom on Saturday and a men's GS on Sunday.

"It was a strange injury. It was right up in my thoracic region which is between your shoulder blades," Miller said. "It's was a really strange place to get a back injury. The general consensus was that it's a nerve issue, which was shutting down the muscles on my left side a bit."

The 30-year-old American has a strong record in Soelden. He won in 2003 and 2004, and finished second in 2005. Last year's season-opener was wiped out because of heavy rain.

Miller has made the technical events - the giant slalom and slalom - his primary focus over the summer. Though he once dominated those events, he struggled with them over the last couple of years, mainly because he focused more on the downhill and super-G - speed events that require different skills than the turn-heavy gate races.