McLaren filed an appeal to get four drivers disqualified from last weekend's Brazilian Grand Prix and give the Formula One title to British rookie Lewis Hamilton. 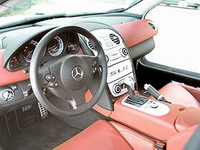 The four drivers were investigated for fuel irregularities following Sunday's race, but governing body FIA said several hours later that there was not enough evidence to penalize any of them.

Hamilton, who had been leading the drivers' standings before the final race of the season, finished seventh and wound up in second place overall, one point behind Ferrari's Kimi Raikkonen.

Three of the four drivers that were investigated finished ahead of Hamilton. If two of them were disqualified, Hamilton would move up and claim the title ahead of Raikkonen.

"The team wishes to win races and championships on the track. However, if there has been an irregularity, which is not the fault of the team, we feel that the matter must be properly examined to ensure that the rules are applied," McLaren said in a statement on its Web site.

The fuel temperatures on the cars of fourth-place Nico Rosberg, fifth-place Robert Kubica, sixth-place Nick Heidfeld and 10th-place Kazuki Nakajima were as much as 14 degrees Celsius (57 degrees Fahrenheit) below the air temperature, FIA said.