Pavel Nedved, Juventus midfielder, elbowed an opponent in the Serie A last week. Therefor he was banned for two matches Tuesday. 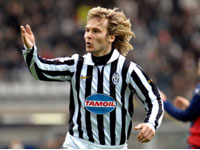 Nedved was sent off in the closing minutes of Juventus' 1-0 win over Genoa on Sunday and will miss Saturday's game at Napoli and next week's match against Empoli.

The Italian soccer league's disciplinary committee also suspended Juventus coach Claudio Ranieri for one match after he was dismissed from the sidelines for protesting.

Five other players were also banned for one to three matches for various offenses.

It is not the first time Nedved has lashed out at a Genoa player. The midfielder received a five-match ban last season for deliberately stepping on an opponent at the Luigi Ferraris stadium, when both teams played in the second division.

Juventus is second in the Serie A with 17 points, three behind Inter Milan but five more than Genoa, which is tied for fifth.