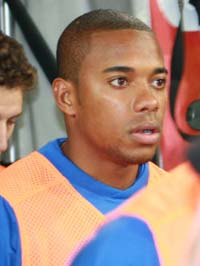 Disciplinary charges were opened against Robinho and Julio Baptista be Real Madrid after their late return from international duty with Brazil last week.

Robinho and Baptista missed training on Friday and were omitted from Madrid's 2-1 loss at Espanyol in the Spanish league the following day.

"The board is very keen to hasten this process and will decide on the case soon," Madrid said in a statement on its Web site.

Robinho was reported to have celebrated into Thursday morning after Brazil's 5-0 win over Ecuador in a World Cup qualifier in Rio de Janeiro.

Both players may be recalled for Madrid's Champions League match against Olympiakos on Wednesday.