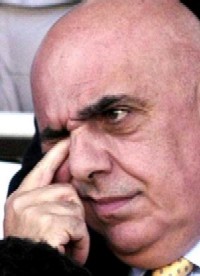 AC Milan needs a morale-boosting win to prove itself and its fans everything’s fine after a poor start to the season.

Milan has not won atSan Siro since a 2-1 victory over Benfica in the opening match of Group D more than a month ago, and lost 1-0 to Empoli in the Italian first division on Sunday - despite fielding almost the same team that won the European Cup for the seventh time in May.

"After 21 years in soccer, I cannot find an explanation for this moment and neither can the fans," Milan vice president Adriano Galliani said. "Compared to the team in Athens, the only difference was that (striker Alberto) Gilardino played instead of Kaka. But aside from that there were no major absences."

Kaka was rested against Empoli, after picking up a knock on international duty for Brazil, while Milan captain Paolo Maldini returned for the first time since having knee surgery after the 2-1 Champions League final victory over Liverpool.

Both are expected to play Wednesday.

Shakhtar has had its best start to the Champions League with two wins in two games, and leads Group D with six points.

Milan has three points, the same as Celtic, after losing to the Scottish team 2-1 two weeks ago.

Shakhtar comes into the game off a 1-0 defeat to Kryvbas Kryvyi Rih in the Ukrainian first division on Saturday for its first loss of the season. It leads the league by six points.

A draw against Milan will give Shakhtar its highest points tally in the Champions League and maintain its bid to reach the knockout stage for the first time in four attempts.

Shakhtar last played Milan in the group stage of the 2004-05 competition, when Milan won 4-0 at San Siro. This time, however, the Ukrainian team has a player who knows the Rossoneri well - striker Cristiano Lucarelli.

Lucarelli transferred from Serie A team Livorno in the offseason and is in good form. He scored both goals in Italy's 2-0 win over South Africa in a friendly last week and got another in Shakhtar's 2-0 victory over Celtic in September.

Milan will be without defender Marek Jankulovski, who injured his knee against Empoli, and goalkeeper Dida, who serves a one-match ban for feigning injury against Celtic.

"Life can't always be like Athens. You have defeats. You have injuries," Galliani said. "But I am not worried.

"After losing the way we did in Glasgow, it's clear we have to try and win Wednesday."