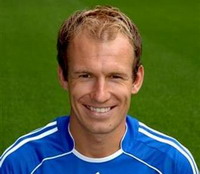 Madrid said on its Web site Thursday that Robben will be out 4-5 weeks due to a torn left thigh muscle suffered in the Netherlands ' 2-0 win over Slovenia in European Championship qualifying on Wednesday.

Heinze is expected to be sidelined 2-3 weeks after tearing left thigh muscle fibers during Argentina 's 2-0 win over Chile in a 2010 World Cup qualifier on Saturday.

Robben and Heinze both joined Madrid on Aug. 23 after completing transfers from Chelsea and Manchester United respectively.

Upon arrival, Robben was recovering from a knee operation and had to wait until Sept. 18 before making his debut with the Spanish champion. So far, he has only completed one full game - against Getafe on Sept. 30.

The forward, who cost Madrid 36 million EUR(US$49 million), could miss as many as six league matches, two in the European Champions League and the Netherlands' final two Euro 2008 qualifying games.

Madrid , which visits Espanyol on Saturday, leads the league with 19 points from seven games.