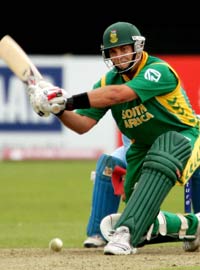 South African security official Faisul Nagel, assistant coach Vincent Barnes and medium fast bowler Vernon Philander were walking toward practice nets on the sidelines when they were racially abused from the stands, Akram said. All three men are black.

"They are in the lock-up as they passed on racially motivated comments on South Africans," Nadeem Akram, a Pakistan Cricket Board official told reporters.

South African team spokesman Michael Owen-Smith said the matter was swiftly handled and the visitors will not lodge an official complaint to the Pakistan Cricket Board.

"The matter was handled properly and we are now satisfied," Smith said.