Venus Williams gained first round against Caroline Wozniacki and second round against Tamarine Tanasugarn Thursday, moving into the quarter-final of the Bangkok Open. 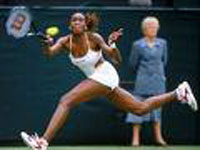 Williams wrapped up the first round against Denmark tennis player 6-2, 6-2 in the afternoon before winning the second round against Thailand's Tamarine Tanasugarn 6-4, 6-1 in 74 minutes at a night session.

"She played aggressive and went for her shots trying to do the best for the fans. But I tried to take control of the match and I'm happy that I closed her out," said Williams.

Williams raced to a 5-0 lead in the second set before Tamarine served an ace to win a game. But Williams hit a forehand winner to close out the match on her next game.

Williams will play against Camille Pin of France in the next round.

All of Thursday's other singles contests were second round matches.

"It was a really difficult match for me. Three hours and it was very hot. I'm happy that I beat her as she has been playing so well," said the 16-year-old Radwanska, who needed five match points to close out the match against Razzano.