France prop De Villiers pondering how to stop England's Andrew Sheridan threat in Rugby World Cup semifinal.Whoever earns the upper hand between the two props could decide which team advances to face either South Africa or Argentina in the Oct. 20 final. 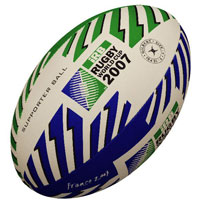 De Villiers successfully took on Tony Woodcock in France's 20-18 quarterfinal upset of New Zealand last weekend, but thinks nullifying Sheridan could be tougher after his inspirational performance in England's 12-10 win over Australia.

"Sheridan has come through as one of the top looseheads of the tournament," De Villiers said on Thursday. "It mill be my job (to stop him). I will be the first man in the frontline. As a tighthead I'm specifically opposed to the loosehead."

The South-African born De Villiers is not surprised by Sheridan's performances at the World Cup, and says he's been threatening this kind of form for a while.

"Sheridan in the past year or two has been explosive in the scrummaging," De Villiers said.

The 35-year old De Villiers will win his 69th cap on Saturday - Sheridan his 19th - but even with vastly more experience he's still not quite sure how to prepare for facing his Sale counterpart.

"I'll have to see on Saturday," De Villiers said. "I don't know. It's important against England to do well in the scrum, and defensively."

France and England both struggled at the start of the tournament, with France losing its opening match 17-12 to Argentina, and England given no chance by its national press after being humiliated 36-0 by South Africa.

Ever since it won the World Cup four years ago, England has been in the doldrums, but De Villiers is impressed at how its managed to keep its composure.

Born in Malmesbury, De Villiers moved to France in 1995, joined Stade Francais and helped it rise from the third division into a European power. He received French citizenship four years later, the same year he made his France debut.

In 2003 he overcame doping allegations but fell off a mountain bike and damaged his shoulder, forcing him out of that year's World Cup.

Married to a Frenchwoman and raising two children, De Villiers owned a restaurant with fellow France prop Sylvain Marconnet near Parc des Princes, and was importing wine from his family vineyard in South Africa.

Against the All Blacks, De Villiers was seen on French television bellowing out the French national anthem, La Marseillaise, which he regards as a song for the team and fans to unite behind, rather than an allusion to France's past.

"I never lived in France during the wartime period and all of that," De Villiers said. "But it's the image of everyone getting behind the team.

"The (French) public is getting stronger and more and more passionate. It has not gone unnoticed. It's up to us to find what we need to take the fight (to England). Find the little keys (to victory) that we need."